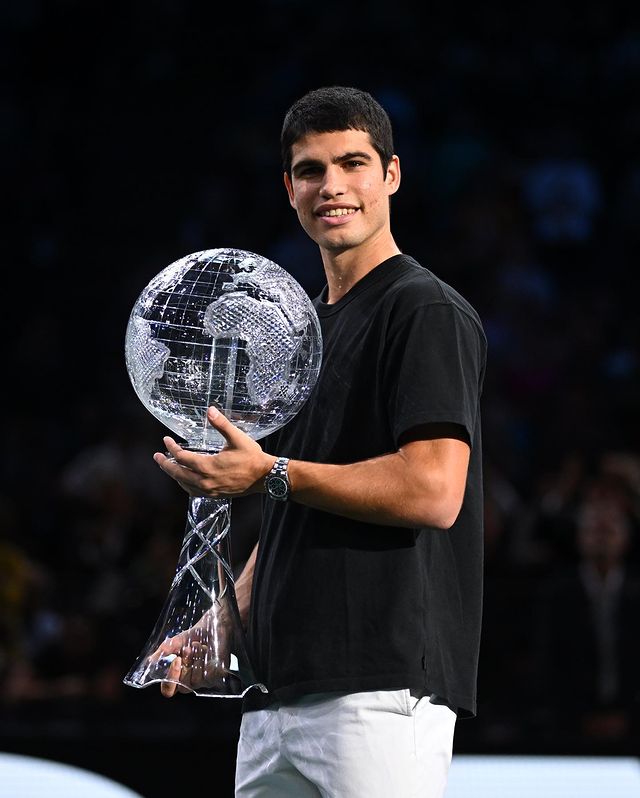 At just the age of 19, Carlos Alcaraz Garcia has set 5 Open Era and 2 records. Following his sudden rise to stardom after the 2021 Next Gen ATP Finals, the youngster continues to make history. Being the youngest world rank No.1 in ATP history, he is predicted to approach or even join the rank of the Big Three. Due to his continuously achievements in tennis career, Carlos Alcaraz Net worth also increasing year by year. Many are hopeful for the Spaniard’s prosperous future career, with some even calling him the new generation’s Rafael Nadal. To learn more about the tennis superstar, keep on reading.

Carlos was born on the 5th of May 2003 in El Palmar, Murcia, Spain to his parents Carlos and Virginia. His introduction to tennis would come through his father Carlos who was the director of the tennis academy Real Sociedad Club de Campo de Murcia. He would learn to play at the very same academy. More recently, however, since 2018, Carlos has been receiving his training from the JC Ferrero Equelite Sports Academy in Villena, Spain.

The world no.1 at just 19 years old has an estimated net worth of over $4million and is expected to rise drastically. Carlos Alcaraz net worth boosted in 2022 when he won 1 Grand Slam and 4 ATP titles in single season. His $2.6 million prize money from US Open 2022 is the highest earning so for from any event in his entire career. Rolex , Nike and Babolat also makes a part in his net worth.

Carlos didn’t just have the most successful season of his career but one of the best performances in 2022, and this fact is reflected in his prize money earnings. The Spaniard has accumulated $9,382,442 in prize money earnings. Of this $9mil sum, he made almost the entire amount this year alone. In 2022, Carlos made $7,627,613. A table of his career earnings by year is given below.

Alcaraz made his ATP main-draw debut at age 16 after his performance at the 2020 Rio Open. His participation in the 2021 Australian Open was his Grand Slam debut which made him the youngest participating player. He won his first grand slam match at the tournament. Alcaraz then made Madrid Open history as the youngest player ever to win a match. But he couldn’t win that tournament either, lost in the second round on the day of his 18th birthday.

His first big accomplishment in ATP Challenger event was 2021 Open de Oeiras III, which boost his ranking into the top 100 and also made him the youngest tennis player to have achieved a top 100 ranking. Alcaraz then reached the third round of a Grand Slam tournament at the French Open, a career first. Later on, in the season, he reached his first ATP final at the 2021 Croatia Open Umag, and won his maiden ATP title. His first ATP title also made him the youngest tour-level champion since 2008. Alcaraz made the second round and semi-finals at Wimbledon and the Winston-Salem Open respectively. The US Open has served as a stepping stone in Carlos’ career.

In the 2021 US Open, he defeated his first top 5 player, clinching the win in the third round against rank No.3. He advanced to the quarter-finals but had to forfeit due to a leg injury he had sustained. He subsequently became the youngest Grand Slam quarter-finalist since 1990. His participation in the Erste Bank Open marked his second and third win against a top 10 player where he defeated world No.7 and No.9. This victory would made Carlos the youngest player in history to reach the top 35 rankings, at 18 years of age. His last major win of the season was Next Gen ATP finals 2021.

2022 becomes Carlos’ breakthrough season, starting with him seeding for the first time in a Grand Slam event at the Australian Open. Then he won his first ATP 500 tournament at the Rio Open. With his ranking now in the top 20, Alcaraz reached his first Masters 1000 semi-final at the Indian Wells tournament. He continues making history, becoming the youngest winner of the Miami Open, and also secured his first Masters 1000 title. Then mid-Barcelona Open, which he later won, Alcaraz’s ranking break into the top 10, made him the 20th teen ever to reach the top 10 since the conception of the ranking system.

Following his 19th birthday, Carlos won his second Masters 1000 title at the Madrid Open. To achieve this victory, he had to defeat the 5-time champion and rank no.4 Nadal, No.1 Djokovic, and No.3 Zverev. Thereby becoming the youngest champion in the tournament’s history and ranking No.6, a career-high. Due to an ankle injury, Carlos was unable to appear in the Italian Open. After recovering, he lost quarter-finals at the French Open, his second Grand Slam quarter-final.

His ranking would jump to No.4 following Carlos reaching 2 consecutive tournament finals in the Hamburg and Croatia Open. Then in the 2022 US Open, he achieved the greatest win of his career. Seeded as No.3, Carlos clinched victory at the final, winning the championship as well as the World No.1 spot. As no. 1, he reached the semi-finals at the Astana Open and the quarter-finals at Basel. He completely missed the season-ending competitions however due to injury. Carlos was forced to withdraw from the Next Gen ATP Finals, Nitto ATP Finals, and the Davis Cup. He still retains his no. 1 ranking, however.

Only 4 years into his professional career, the world No.1 has accumulated 6 ATP singles titles, 4 ATP Challenger titles, and 3 ITF Tour Titles. The former junior ranked No.22 won his first and only Grand Slam tournament title at the 2022 US Open. His greatest achievement however has to be winning the 2021 Next Gen ATP Finals. Other titles of his include the Miami, Rio, and Madrid Open. He has the Open Era record at all these events for being the youngest winner in the tournament’s history. He already held the record for youngest no. 1 player and as the 2022 season comes to a close, the youngster remains no. 1, now being the youngest year-end no. 1 as well.

The US Open champion is sponsored by luxury watch brand Rolex. He signed on with Rolex as a brand ambassador earlier 2022, when he was still 18. Beside Rolex, Nike Endorses Alcaraz with clothing and shoe. In his amateur career, he was first sponsored by Lotto, and when lotto contracts about to end then in 2015 Nike swooped in. Alcaraz signed his first professional contract with Nike in January 2020. On court, he is always seen wearing the Nike Air Zoom Vapor Pros on his feet. When we talk about Carlos’ racquet, Babolat sponsored him since start. In summer, Carlos announced he became a brand ambassador of BMW Spain.

Alcaraz, being sponsored by Babolat, He uses the Babolat Pure Aero VS racquet. The racquet has a 16×19 string pattern and a 100in2 head size.

The Spaniard is yet to be seen dating anyone publicly, possibly because of his young age and sudden leap to international tennis stardom. He has however been suspected of dating his close friend Maria Gonzalez Gimenez. He currently has no children.

How many titles has Carlos Alcaraz won?

Is Carlos Alcaraz dating anyone

No, he is currently single but suspected of dating Maria Gonzalez Gimenez.

Which racquet does Carlos Alcaraz use?

He uses the Babolat Pure Aero VS racquet.

He had an injury “an internal oblique muscle tear in the left abdominal wall” which cause him 6 weeks to recover.