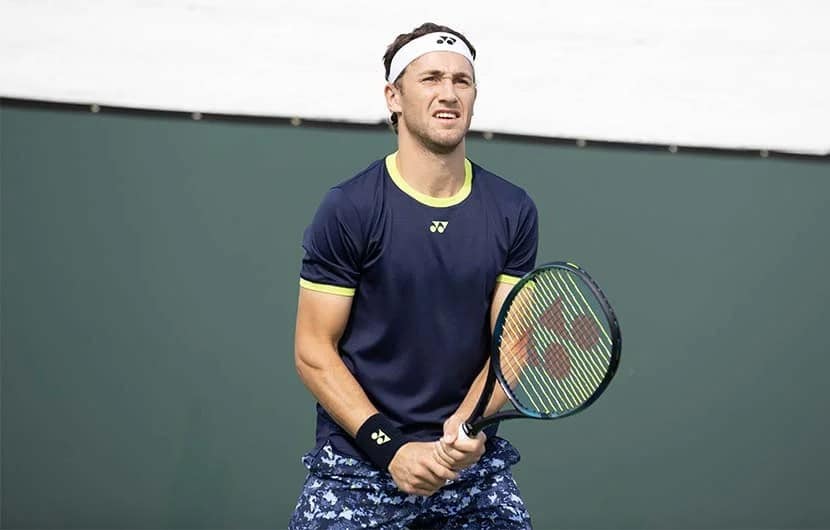 Norway’s greatest tennis player in history and Next Gen ATP Finals participant, Casper Ruud just had this breakout season performance. The former world no. 2 and current no. 4 has made Norwegian history after his 2 finals at the 2022 French and US Opens and Ruud continues to break record after record. In this article we’ll be touching on his career, what racquet he uses, his relationships, his net worth and so much more.

Casper Ruud was born on the 22nd of December 1998 making him 23 years old as of November 2022. He has 2 sisters, Caroline and Charlotte, and from his parents, Lele and Christian Ruud, his father Christian was a professional tennis player on the ATP Tour.

Christian Ruud was the highest-ranked Norwegian player at no. 39 until his own son Casper Ruud became world no. 2 in September this year. Rafael Nadal was his tennis idol ever since he was little and since 2018, Casper has been training at the Rafael Nadal tennis academy in Spain. He played against his idol for the first time professionally at the Roland Garros for the French Open Finals.

Keeping in mind his prize money earnings and numerous sponsorships and brand deals, Ruud’s net worth is estimated to be above $5mil. Seeing as he just experienced his breakthrough season, his net worth is projected to grow much more in the coming years. Especially during the current season, 2022, he earned almost half of the earnings of his career.

The no. 1 Norwegian player has accumulated an impressive amount of earnings from prize money alone; $9,564,936 to be exact. He just experienced his most successful season to date with almost half of his total earned in 2022 alone. Ruud has seen gradual increases in his earnings ever since going professional in 2015. The table below better illustrates this notion.

Casper Ruud became a professional player in 2015. As a junior Ruud participated in 3 junior Grand Slam singles events reaching the third round at the French and US Opens.

His best junior Grand Slam showings were in the doubles category, however. At the 2015 Wimbledon and the 2016 French Open, he made it to the semifinals. He started the 2016 season ranked juniors world no. 1. Ruud won his first Futures tournament followed by another in August.

He also won his first Challenger tournament at Copa Sevilla, becoming the fourth-youngest player to do so. He defeated his first top 150 players, upsetting the then-rank no. 75. His last juniors accomplishment was qualifying for the ITF juniors masters where he became runner-up. Ruud would end the year ranked 225.

2017 saw his first Grand Slam appearance and first ATP semifinal but he won no title that year. Ruud also made his first ATP Masters 1000s debut.

It was in 2018 that Ruud made a Grand Slam main draw appearance through the qualifying rounds at the Australian Open. He also qualified for the  French and Australian Opens but with no significant achievements. The best accomplishment of his career so far was upsetting David Ferrer, former world no. 3 at the Swedish Open.

Then in 2019, Ruud finally broke into the top 100 after reaching the semi-final of the Basil Open. At the U.S. Clay Court Championships, he earned his first final and even won a Masters event match but still, he had yet to win a title.

Ruud also played in his first Wimbledon championship but he lost in the first round. In doubles, at the US Open Ruud reached the third round, his best doubles showing of the season.

Multiple top-ranked players were upset by Casper this season, including former world no. 22 Daniel Evans and no. 10 Pablo Carreno Busta. His performance that year helped him qualify for the highly esteemed Next Gen ATP Finals where he got knocked out in the first round.

Ruud’s ranking skyrocketed in 2020 in light of every next season becoming his greatest so far. He won his first ATP title at the Argentina Open and the greatest Grand Slam performance of his career so far.

At the US and French Opens Ruud would reach the third round followed by multiple quarter-finals and semi-finals in other tournaments.

At the first ATP Cup, he defeated former world no. 8 John Isner and his doubles participation along with Viktor Durasovic saw their win against the former world no. 8 and no. 1 in doubles. Like in previous seasons, he continued to upset top-ranking players and by the end of the year, Casper ranked world no. 25.

2021 was a phenomenal year for the Norwegian with 5 titles, 4 consecutive tournament semi-finals, and numerous wins against the top 10 players. Stefanos Tsitsipas, Diego Schwartzman, Fabio Foginini, and Denis Shapovalov tasted defeated by Ruud. He also had his greatest Grand Slam performance so far in both singles and doubles.

At the Australian Open, he reached the 4th round of a Grand Slam for the first time, and at the Wimbledon Championships, he got to the quarter-finals in doubles, becoming his greatest doubles performance to date. His first ATP Finals along with 2 Masters semi-finals helped him become world no. 8.

Now coming to the present year, Ruud has had one of the most successful seasons for a non-Grand Slam champion. At the Miami Open and then the Italian, Ruud reached his 4th and 5th ATP Masters 1000 semi-final, losing to Carlos Alcaraz in the finals, the future no. 1, and Novak Djokovic respectively.

He bested many top players along the way like Cameron Norrie, Alexander Bublik, Francisco Cerundolo, Alexander Zverev, and others. The Argentina and Geneva Open victories got him his 7th and 8th career titles with his most recent title being won at the Swiss Open Gstaad.

His greatest accomplishment however has to be becoming runner-up at 2 Grand Slams the US Open and the French Open. Both tournaments were of immense importance to his career as at the French Open, he played for the first time professionally against his idol, and at the US Open, the title would decide who the world no. 1 would be.

Although he lost to Carlos Alcaraz, the runner-up position landed him the world no. 2 spot. Following the Grand Slams and as of 13th November, Ruud made the quarter-finals at the Korea Open and is currently playing in the Nitto ATP Tour Finals where he has won his first match against Canada’s no. 1 Felix Auger Aliassame and 2nd match against American star Taylor Fritz. After this, he secures his place in the semi-final of the Nitto ATP Finals 2022.

The former junior world no.1 has only recently started winning ATP titles with his first in 2020. As of November 2022, Ruud has won 9 ATP titles along with some ITF titles as well. In many categories, he has been the first Norwegian player.

These disciplines include being the junior’s world no.1, ranking in the top 20, reaching a Grand Slam final which he has done twice in 2022, and reaching an ATP1000s final. The 2 latter are his greatest accomplishments so far.

Arctic Group is an investment bank, and Aker BP is a gas and oil company based in Norway sponsored Ruud. He endorses Yonex racquets and sportswear and serves as a global brand ambassador for W Initiative which is a humanitarian organization. Other sponsors of his include SuperOffice, Proaktiv, Porsche, and drinking-water supplier Isklar.

Casper Ruud, sponsored by Yonex uses a modified EZONE 100. The specs of his racquet include a 16×19 string pattern and a 100 in2 head size. He endorses the Yonex EZONE 98L however, which is not too dissimilar to the racquet he uses. Yonex also sponsored their clothing/shoes to Casper Ruud head-to-toe.

Ruud is in a long-term relationship with his girlfriend Maria Galligani. The Norwegian couple started dating in 2018 and have no children together. Maria Galligani is a psychology student completing her Master’s at the University of Southern Denmark.

What is Casper Ruud’s net worth?

His net worth is estimated to be around $5mil.

No, he is in a relationship with University of Southern Denmark Psych student Maria Galligani.

No, Ruud has yet to win a major title but he has been runner-up in 2 Grand Slam tournaments.

Ruud’s own father and former no. 1 Norwegian player, Chrisitan Ruud coaches him.

What Racquet does Casper Ruud use?

Casper Ruud use Ezon 100 of the Yonex brand.