Want to see what a great tennis player has been using since his career started, Novak Djokovic’s tennis racquets history with complete specifications. Joker is listed among the top 3 tennis players whereas tennis fans never come to the conclusion which one is a GOAT.

However, we are not discussing their rankings or playing strategies on which they are on top like on social networks you can see lots of news about “King of Clay” which means Rafael Nadal, the same thoughts appear when you talk about Roger Federer that he is No.1 tennis player in the world.

Don’t forget that every professional tennis player never shared their equipment information publically till they got a more improved version, and when it comes to their racquets they are very sensitive and want very precise and accurate modifications.

Djokovic is born in Serbia, and his father is Croatian. They own a sports business, Family Sports, which runs three restaurants and a tennis academy. Djokovic has two brothers, Marko and Djordje, who played tennis professionally. His older brother, Djordje, has also played tennis but has not yet made the transition to the ATP Tour.

Novak Djokovic was named Men of the Year 2011 by GQ magazine and was recently named the world’s best male tennis player by the Sporting Statesman. He has received many honors over the years, including the prestigious Grand Slams, but none more impressive than his rise to prominence.

This Serbian native has also signed endorsement deals with companies like Mercedes-Benz, FitLine, and Seiko. He used to play with Wilson tennis racquets till 2008, later in 2009 he switched to HEAD tennis racquets and still uses the same brand of racquets. 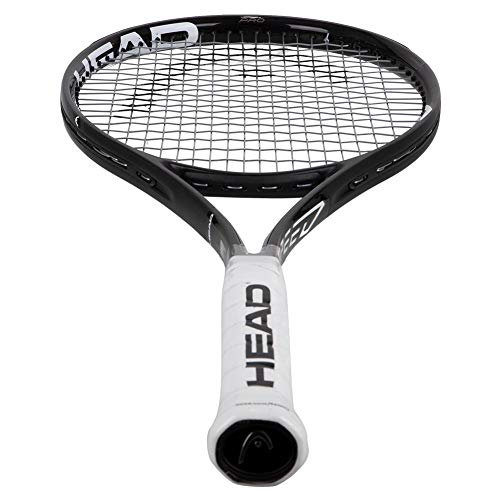 At a young age joker used to play with HEAD rackets and later pro stack Wilson H22 frame with paint job is used by Djokovic.

When officially he first endorsed HEAD in 2009 before that Novak Djokovic also took home his very first Slam during the Australian Open in 2008 with the same Wilson racquets.

He shakes hands with HEAD and wins 16 major titles from 2011-2021 using their racquets. The Novak actually racquet he is using still with paint job is PT113B.

Head PT113B is a modified and designed frame is only for joker and he normally used lead on his racquet to make it heavier, later in 2018 due to the heavy swing weight tennis racquet his performance and arm didn’t work as he wishes due to tennis elbow, to prevent it he asked for some changes.

Here are the specs of the Novak Djokovic racquet, Head PT113B1

Now you can buy a Novak Djokovic tennis racquet that goes with the name “Head Graphene 360+ Speed Pro“.

As I already discussed above, top-ranked ATP tour players don’t want to share their actual equipment specifications publicly, tennis racquets we see in the shop are not like the someone we have watched in tennis matches.

We can say that only the paint job is the same, and that will help tennis brands to sell their racquets in the market, Novak Djokovic fans would love to play with the same racquet as their favorite player used.

He used an 18×19 string pattern which is not so common among pro-level players or even tennis racquet manufacturers make 16×19 as a perfect string pattern.

He uses Babolat VS Team Natural Gut 18 for mains and for courses Luxilon Alu Power is the real strings for Novak Djokovic racquet to gain power and feel.

The maneuverability of Novak Djokovic’s racquet head customization will be difficult for regular tennis club players. The Head PT113B is a great racquet for power and stability, despite a few downplays in the comfort.